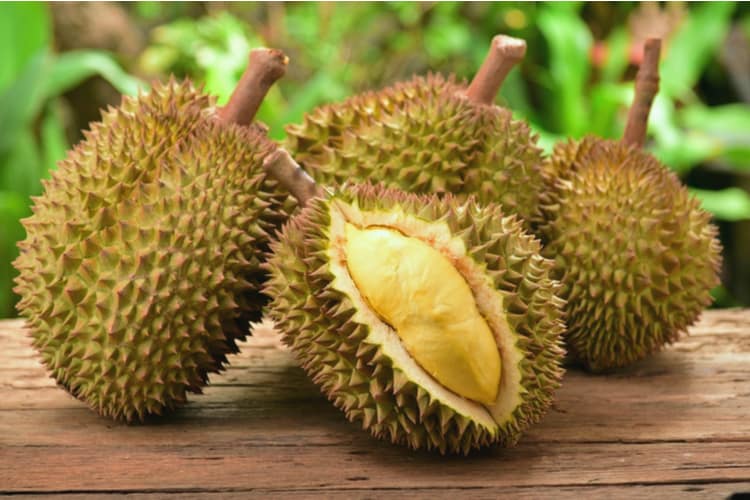 Want to know more about the Durian Fruit? It’s infamous for being one of the smelliest fruits in the world, and here’s everything you need to know about Durian, including why it smells, where to eat it, and other interesting facts.

If you’ve never been traveling around Southeast Asia, you might be asking yourself what the heck a Durian fruit is? They are rarely sold in Europe or the U.S, and if you can find them, they will be vacuum packaged.

Durian is a native fruit of Malaysia, Indonesia, and the island of Borneo. Due to its popularity in SE Asia, cultivation has spread to Thailand, Vietnam, Sri Lanka, Southern India as well as the Chinese island Hainan.

It’s particularly famous for its stench, and you can smell it several hundred meters away if the Durian fruit is ripe, even longer distances if it has been cut open.

But Durian is also a superfruit, fully packed with vitamins and minerals.

How to eat Durian fruit

The easiest way to eat a durian fruit is to buy it ready-made from a store or market vendor, who will cut the fruit and package it for you. Some restaurants will also serve it fried or with rice, and some even add coconut milk.

If you buy a ripe durian fruit, you’ll find that the texture is quite creamy and softer than you imagined when seeing its outer appearance. I recommend to cut it in smaller pieces and eat with your hands or use a fork.

Also, note that there are seeds inside the durian fruit, so you should eat the flesh around the seed.

Due to such popularity in Southeast Asia, there are many durian products available these days, so it can be eaten in many ways. For example, you can buy durian ice cream, candy, chips, crackers, cakes, and even beverages with durian flavor.

More information about the Durian Fruit

Durian is nicknamed the King of fruits, and it has a quite unique appearance with spikes. It typically weighs between 1-3 kilo (2-7 pounds) and is known for its distinct smell.

Some can grow as large as 30 centimeters (12 inches) in length, and 15 centimeters (6 inches) in diameter. The inside is characterized by the pale yellow flesh which can also be red depending on the variety.

The fruit grows on trees belonging to the Durio genus, of which there are 30 known varieties. It grows primarily in Southeast Asia and originally comes from Malaysia, Indonesia, and the island of Borneo.

There are hundreds of different varieties of durian that are grown commercially in Malaysia, Indonesia, Thailand, Cambodia, Vietnam, Sri Lanka, Southern India as well as the Chinese island Hainan.

The fruit grows in tropical regions where the mean daily temperature doesn’t go below 23 degrees Celcius (73.4°F). The Hawaiian islands have had successful planting projects as well, thanks to their tropical climate year-round.

In addition to being labeled as the smelliest fruit in the world, it’s also known for being rich in nutrients. It’s basically a superfruit packed with important vitamins and minerals as well as dietary fiber.

For example, just 100 grams contain about 21% of the recommended daily intake of carbohydrates, 33% of daily recommended Vitamin C, 10% of dietary fiber, 20% of total fat and 31% RDA of Thiamin.

Furthermore, its pungent smell has caused some countries to ban the fruit in public spaces. When traveling around Southeast Asia, you’ll occasionally see signs that say “no durians”.

It’s often banned on public transportation systems unless the package is airtightly sealed. Some hotels have also banned the fruit due to its smell, which can cause disturbance and give an unpleasant experience for their guests.

Where to buy durian fruit?

Generally, fresh durian fruit is only sold in markets and roadside stalls. The ones sold in supermarkets are usually pre-packaged in a scent-absorbing material, although some supermarkets will also sell whole durians.

It’s a seasonal fruit, so you won’t find it year-round in markets. However, when the season starts, you’ll find it in abundance in many of the food markets of Southeast Asia, especially in Thailand, Vietnam, Malaysia, and Indonesia.

The smell of durian is perhaps the hardest thing to explain about this fruit, and even though it sounds cliché, this is one of those aromas that you have to experience and smell for yourself to determine what it smells like.

It smells like a rotten egg/cheese or natural gas mixed with cream cheese and onion. It can also smell somewhat like rotting meat or sulfur.

Why does durian smell so bad?

Contrary to what many humans say about the fruit’s pungent smell, most animals are actually attracted by the smell. The Durian is highly optimized in its genes to produce a rich aroma, possibly to attract animals which will then spread its seeds.

How does Durian fruit grow?

All varieties of Durian grow on trees belonging to the Durio genus, and they typically fall down when ripe. The Durio tree can grow in places where the average temperature is at least 23 degrees Celcius, and where rainfall is plenty.

It generally takes around 4-10 years before the trees are bearing any fruit.

Is Durian banned in Singapore?

Yes and no, it is banned in the public transportation system in Singapore, and many hotels also have a ban on the smelly fruit.

Can you bring it on planes?

Yes, most airlines allow you to bring durians on planes as long as the fruit is placed in an airtight sealed container. It’s not illegal to carry it on-board, but some airlines might have their own policy.

Are jackfruit and durian the same?

While both fruits share a similar appearance, the jackfruit has no thorns and they aren’t related. The Jackfruit is sweeter and doesn’t have the same smell or taste as the Durian fruit. Furthermore, the Jackfruit actually originated in India.

How can you tell if it has gone bad?

If it smells sour or has a sour taste, the durian fruit has likely gone bad and should be thrown away. Another way to tell if durian is bad is to look at the stalk and see if it’s dry and withered.

What happens if you eat too much?

Too much of anything is never a good idea, and eating too much Durian fruit is no exception. Although no real dangers are likely to incur, you might gain some weight if you eat Durian every day due to relatively high caloric value.