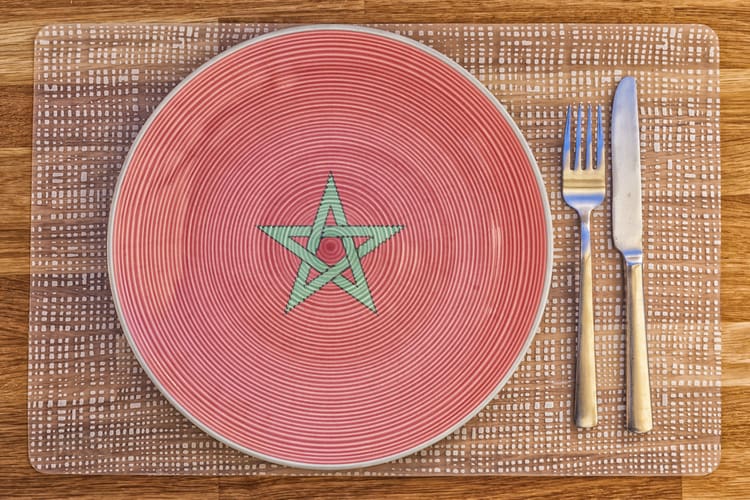 Want to know more about Moroccan food? Here are 15 traditional dishes to eat in Morocco as well as more information about the cuisine.

Moroccan food is well-known around the world for its rich flavors with spices and herbs as well as slow-cooked meats and delicious couscous. There are many interesting dishes that you should try when visiting Morocco, and here are some of my favorites!

The tagine is actually the cone-shaped cooking vessel which is usually made in ceramic or clay. It’s an integral part of Moroccan cuisine, and there is an endless amount of dishes that can be cooked in a tagine.

One of the most common tagines is with chicken and vegetables. If you haven’t had Moroccan food cooked and served in Tagine, you haven’t got the full experience yet!

Morocco is one of the largest exporters of sardines, and it’s also a popular food in Morocco. My favorite is the sardines that are stuffed with Chermoula. It’s mostly eaten in the coastal cities but sardines are also eaten and sold in markets in other parts of the country.

The stuffed sardines are usually served as a starter or side dish, and they are absolutely delicious.

Brochettes are the Moroccan version of Kebab, and it’s one of the best street foods from Morocco which is available in markets all over the country. They are served on skewers and can be meat from chicken, lamb or beef which can be accompanied with bread and harissa.

The typical cost for a meal of brochettes is around 20 Moroccan Dirham, and it’s a great choice if you want a quick and delicious meal in Morocco.

Couscous is another typical food from Morocco which shouldn’t be missed. It’s recognized as the national dish of Morocco and is typically served with vegetables and some kind of meat.

Couscous is made from semolina wheat and it originated from the Maghreb cuisine. Since then it has become popular all over the Middle East due to its versatile use. It can be compared to bulgur or rice, but it has a distinct texture and flavor which is unique for couscous.

Another local favorite from the Berber cuisine is the Merguez sausage, which is made from lamb. It’s popular all over the North African region, and Morocco is not an exception. It can be served with bread or in a tagine.

Chermoula is actually a thick marinade that is specifically prepared for fish and seafood. It’s mix of spices and herbs and can come in different variants, and there are several dishes in Morocco which use chermoula for fish.

Harira is a flavorful lentil and chickpeas soup that is commonly eaten during Ramadan to break the fast, but it can also be served at home or in restaurants as a starter.

It’s an easy-to-make soup where the stock is often made with beef or lamb, and chaariya (noodles) are added to make it savior.

Bread is a big part of Moroccan cuisine, and there are many varieties. Khobz is one of the most popular breads in Morocco, and it’s baked in wood-fired ovens and commonly served on the side to various meals.

This is a chicken pie that is traditionally served on special events, but it can also be made at home and it’s available in some restaurants too.

Tanjia is most common in Marrakesh, and just like the tagine, it’s a clay pot dish that is usually made with beef, lamb or chicken. Tanjia dishes are known for their rich flavors with plenty of herbs and spices.

Kefta is Moroccan meatballs and can be served with couscous, vegetables, and various spices. The meatballs are made of ground beef or lamb which is mixed with paprika, onion, coriander, cumin, and parsley. Some recipes include cinnamon, mint leaves, and cayenne pepper.

Rfissa is another traditional dish from Morocco, which is mainly served during celebrations. It’s usually made with chicken and lentils as well as fenugreek seeds, msemmen, and ras el hanout. It’s often decorated with quail eggs, fruits and nuts to add to the festivity.

Zaalouk is a type of cooked salad which is made with eggplant and tomatoes. It also includes garlic, spices, and olive oil. Zaalouk is typically eaten with bread and served as a side dish.

Lamb or Beef with Prunes

This combination is another showcase of the excellent and unique flavors of Moroccan cuisine. This dish can be made with either lamb or beef, which is cooked together with spices until it’s really tender. Prunes are added on the top along with almonds, and some syrup.

More about the food from Morocco

As a foreigner, you’ll find the Moroccan cuisine to be both colorful and flavorful. It’s not too spicy, but the dishes all have rich flavors due to the heavy usage of spices and herbs.

Beef, lamb, and chicken are the most common meats and a typical meal will always include some kind of meat as well as salad, couscous, bread, and vegetables. Tagine is the typical way of cooking dishes, and in general, you’ll find Moroccan food to be very healthy.

The main influences of the Moroccan cuisine can be traced back to Berber, Maghreb, Jewish, and Arab cultures. It’s very unique with flavors that you won’t find elsewhere in the world.

The best Moroccan food is usually found in the souks and local restaurants where the locals are eating. Avoid the touristy restaurants and ask the locals for advice on good places to find authentic food from Morocco.

What is typical Moroccan food?

A typical meal in Morocco is made with chicken, beef or lamb in a tagine with vegetables. Couscous is also very typical Moroccan food.

Authentic Moroccan cuisine uses a lot of spices, but it’s not necessarily spicy per se, although it will be very flavorful. Most Moroccan food isn’t spicy hot.

What do they eat for breakfast in Morocco?

Which hand do Moroccans eat with?

Moroccans always eat with their right hand and will almost never use their left hand in conjunction with eating.

It’s customary to eat with your first two fingers and the thumb. Only use your left hand to pick bread or passing dishes to others.

Can I drink alcohol in Morocco?

While alcohol is forbidden in Islam, there is still alcohol available in Morocco. Alcohol can only be consumed and purchased in licensed hotels, bars, and tourist areas.

Additionally, there are supermarkets selling alcohol, but only foreigners are allowed to drink alcohol in public. Some Moroccans who aren’t religious might drink alcohol from time to time, but it’s not something that is customary.

If you’re invited for dinner or being offered some food for free in Morocco, it’s considered rude to turn it down and say no. Always accept the offer if you want to be polite and follow Moroccan food customs.