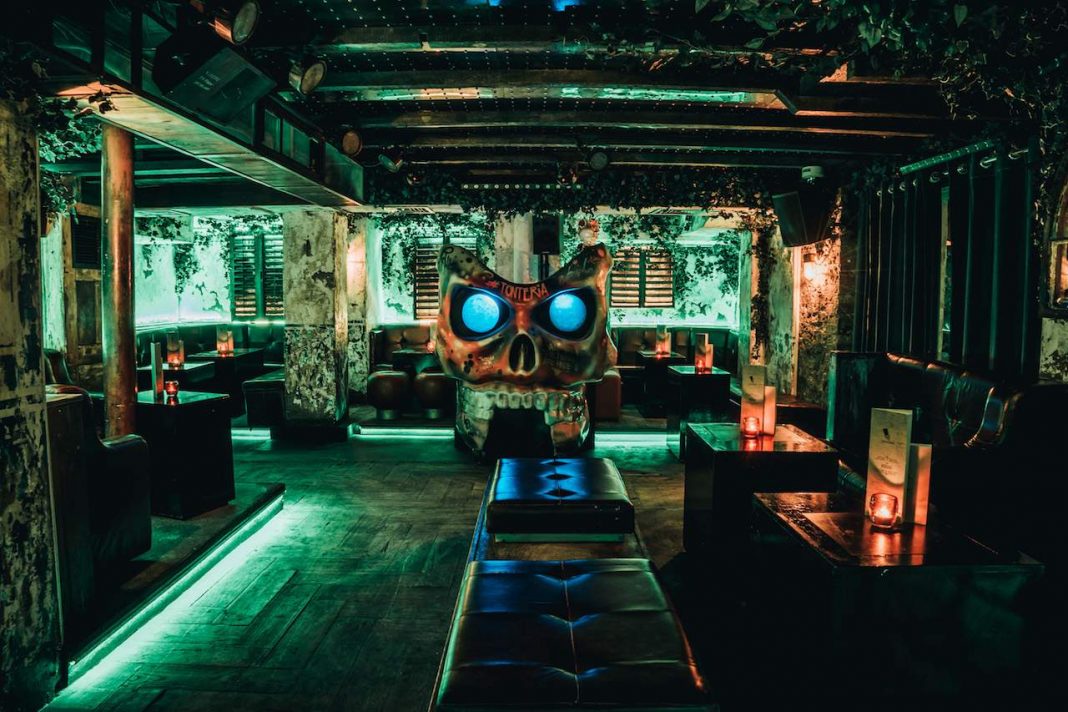 Sloane Square is dominated by chic bars and luxury hotels, so I was intrigued to learn it is also the home of Tonteria, an underground Mexican tapas lounge inspired by Día de los Muertos (Day of the Dead).

Tonteria opened 5 years ago when tequila was becoming all the rage in London. Co-Founder Alain Dona wanted to create a space that was inspired by the colourful culture of Cancun and the ancient Mayan ruins of Tulum. The first thing you notice when you walk into the room is a giant, glowing skull that doubles as a DJ booth. Green creepers adorn the walls and the black leather upholstery and low lighting gives it a very intimate feel.

Despite the dramatic décor, Tonteria has a relaxed vibe, at least until the sun goes down. When functioning as a tapas bar, the music is pleasingly quiet, although a few of the songs seemed more suited to a hotel lobby. The menu has recently upped its game with a delicious selection of posh Mexican street food that’s both fresh and authentic.

Foodie highlights included tortilla chips with a generous dollop of creamy guacamole topped with pomegranate seeds and ricotta cheese. I was also very impressed with the patatas bravas with garlic aioli, spicy tomato sauce and coriander – the best I have eaten in London! The crispy squid was good but I felt the green pepper and lime salsa needed an extra chilli kick.

For desert we tucked into some excellent churros accompanied with a molten pool of dark chocolate dipping sauce.

For drinks, we sipped on glasses of delightfully slushy frozen margaritas. If you prefer your tequila straight, there’s a vast selection on offer at the bar including Patrón and Don Julio. You can even get your shots delivered by the “tequila express”, a model train suspended on the ceiling.

Alain told us that he wanted to create a venue that was “all about accessibility, kindness and service”. Our waitress, who was dressed to kill in leather and latex (she looked fantastic) was charming and attentive throughout our meal. Alain himself defied the club owner stereotype with his warmth and good humour, greeting and embracing every member of staff who crossed his path.

As if by magic (or maybe the tequila) the venue transformed from a tapas bar into a nightclub. The music volume sky rockets and the tunes (or maybe the tequila) make you want to get up and dance. The space is dominated by warm bodies swaying to the music, and if you’re still there at 1am, the fun really starts.

Tonteria is well known on the club circuit for hosting some riotous themed nights celebrating all things Mexican. On the night we were there, elaborately dressed dancers with sugar skull face paint performed some amazing dances with sparklers.

Tonteria is also a firm favourite amongst the celebrity circuit, who head there for Muertos Mondays. Previous visitors include Prince Harry, Tom Hardy and Rihanna, and you’ll often spot Ferraris and Lamborghinis parked outside on Monday night.

As we headed out of venue in the early hours of the morning, a quote about tequila from inside the venue came to mind: “One minute you are sexy dancing, the next you are on the floor, pantless, making out with a shoe.”

When it comes to Tonteria, nothing would surprise me.

When: The tapas bar is open on Monday, Thursday, Friday and Saturday from 8pm to 10:30pm and transforms into a nightclub at 11pm, closing at 2:30am on Monday/Thursday and 3am on Friday/Saturday.

Getting there: The nearest Tube station is the Sloane Square (Circle and District Line). It takes less than a minute to walk to Tonteria, which is right on Sloane Square next to The Botanist.

Where to stay: No matter how much tequila you have consumed, you should be able to manage the walk back to Sloane Square Hotel, which is less than a minute’s walk from Tonteria. 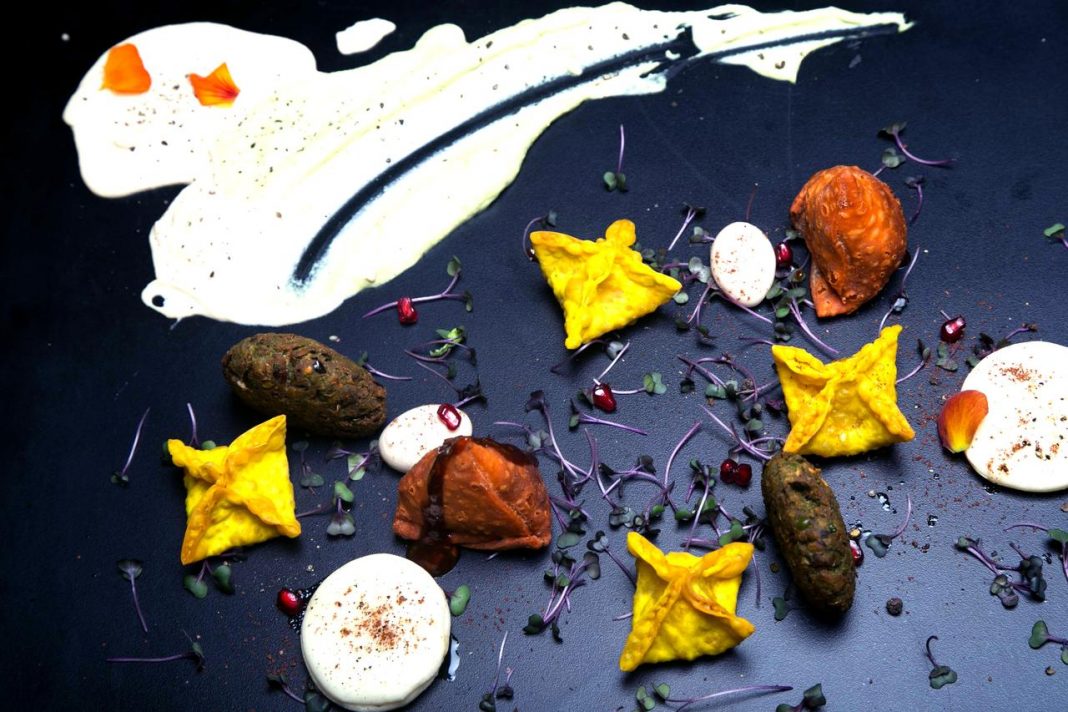 A new boy on the Indian cuisine block in the shape of the glitzy Farzi Cafe has turned up on London’s Haymarket last month dedicated to confusing your tastebuds. The chefs at Farzi serve not-quite-Indian cuisine and some dishes vaguely allude to the idea of Indian cuisine. Actually, the clue is in the name, “Farzi”, which means “fake” but here they prefer the word illusion. They have even created their own adjective saying that some dishes have been “farzified”.

Some may already be familiar with Farzi. It is part of the Massive Restaurant group that has nine restaurants across India and Dubai. It was launched in 2012 by Zorawara Kalra whose aim is to “evolve” Indian fare.

You might say the restaurant has a touch of the renegade about it. For instance they serve what looks like the distinctly British fish and chips dish, but when you tuck in you are actually tasting Amritsari fish (Halibut), a traditional street food of Punjab, with chips and a pea mash with a kick.

The experience starts with a lovely welcome with a doorman opening the door as you approach followed by greetings from a team of smiling faces when you step in. The central space is taken up with a bar with an elevated shelf with their selection of whiskey bottles (around 60) that jostle for attention in the glimmering orange light.

Tables are spread around the expansive square, some with comfy corner coves and this spills into a lower floor where it is a little quieter but for me less atmospheric.

It’s pretty classy stuff and it’s easy to see how the £4 million investment has been spent.

Part of the fun of dining at Farzi cafe is the expectation of feasting on “Farzified food”.

We shared a couple of  starters: The Udupi Paneer popcorn, a dish from the Indian state Karnakata and in particular the Udupi province. It comes as a bowl of fried balls of cottage cheese spiced with karram podi seasoning which contains chilli powder.

My favourite Indian dish of crispy Pani poori shells came filled with quinoa and mash potato. They serve it with small side jugs of tamarind water, coriander water and buttermilk. The idea is to pour a cocktail of the three in each of the shells to flavour as you like.

We followed this with a a plate of Arancini, a traditional Sicilian dish of rice balls, but this was Dal Chawal Arancini which contains dal and coriander and is served with aachar and chutney and amusingly topped with mini rolled popadoms. The concoction makes for a surprising taste of flavours.

The main courses were chicken tikka massala and braised lamb chops and sharing bowl of dhal. The masala came hotter than I had expected yet I still scoffed the lot happily. The lamb had been slightly spiced and that flavour made its appearance as a background note to the maple syrup. No matter – it was a tasty dish.

Desserts are suitably sweet. Srikhand ‘air’ cheesecake with mango coulis was as light and as tangy as it sounds and the Laddoo – a chocolate coconut covered shell with coconut mousse and berries was delightful too. A plate of petit fours was served as well and though they looked sweet, some were tantalisingly savoury. A nice end to a surprising evening.

Verdict: The restaurant offers a spacious and relaxing environment with calming light. Staff are attentive and give the time to explain what they are serving which helps to understand the flavours. The idea of “farzified” food is a great one but from time to time the combined flavours don’t entirely work. But, would I go again? Most definitely.